I ask you to do a lot of imagining. Indulge me once more. Imagine Dubai. Specifically, architecture in Dubai. What do you see?

As a student of architecture, my preconceived ideas of what Dubai’s architecture would look like reflects exactly what a Google Image search yields. One of a kind buildings. Feats of architecture found only in this one area of the world. Buildings so unique that, no matter their performance, will be referred to as masterpieces (Though I disagree with this type of architecture, it exists and is easily photographed).

Almost as impressive as the buildings I saw was the construction graveyard that takes up so much of the city. 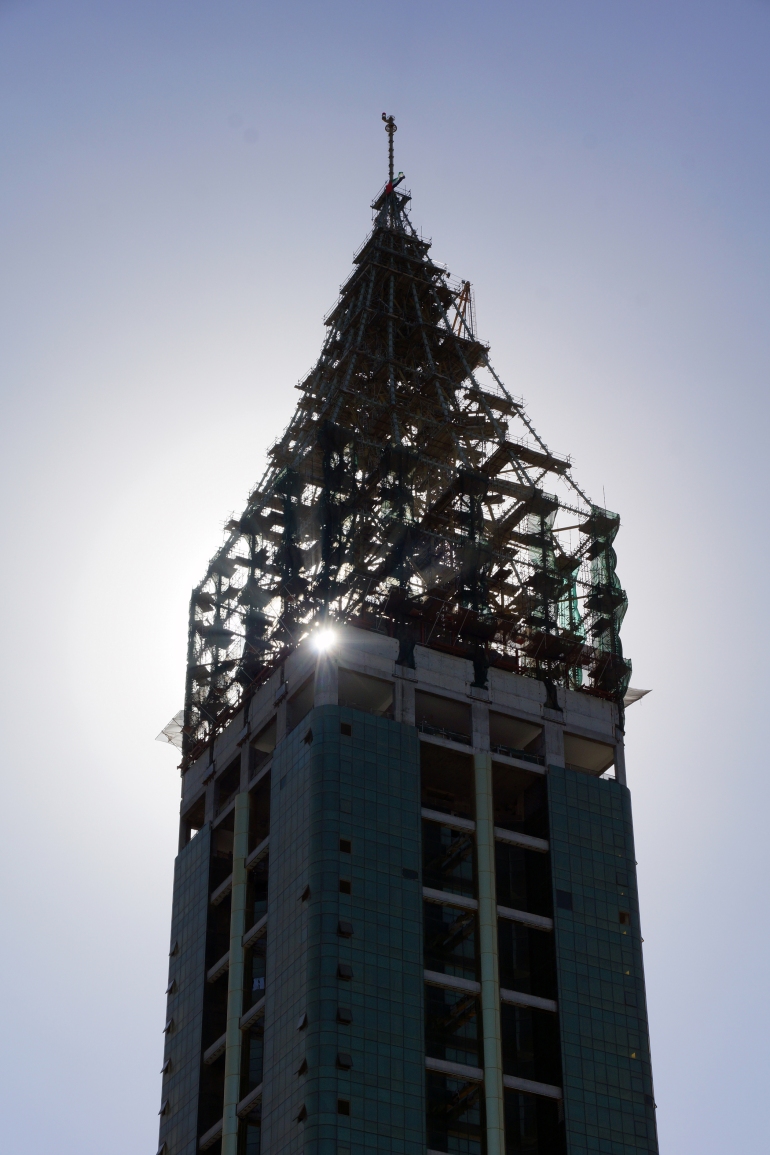 Tall towers that are so near completion are left unfinished and exposed to the elements.

Re-bar is rusted and concrete is weather worn.

Idle cranes hover over empty shells and serve as monuments to tough economic times. You can literally trace exactly where the money ran out. 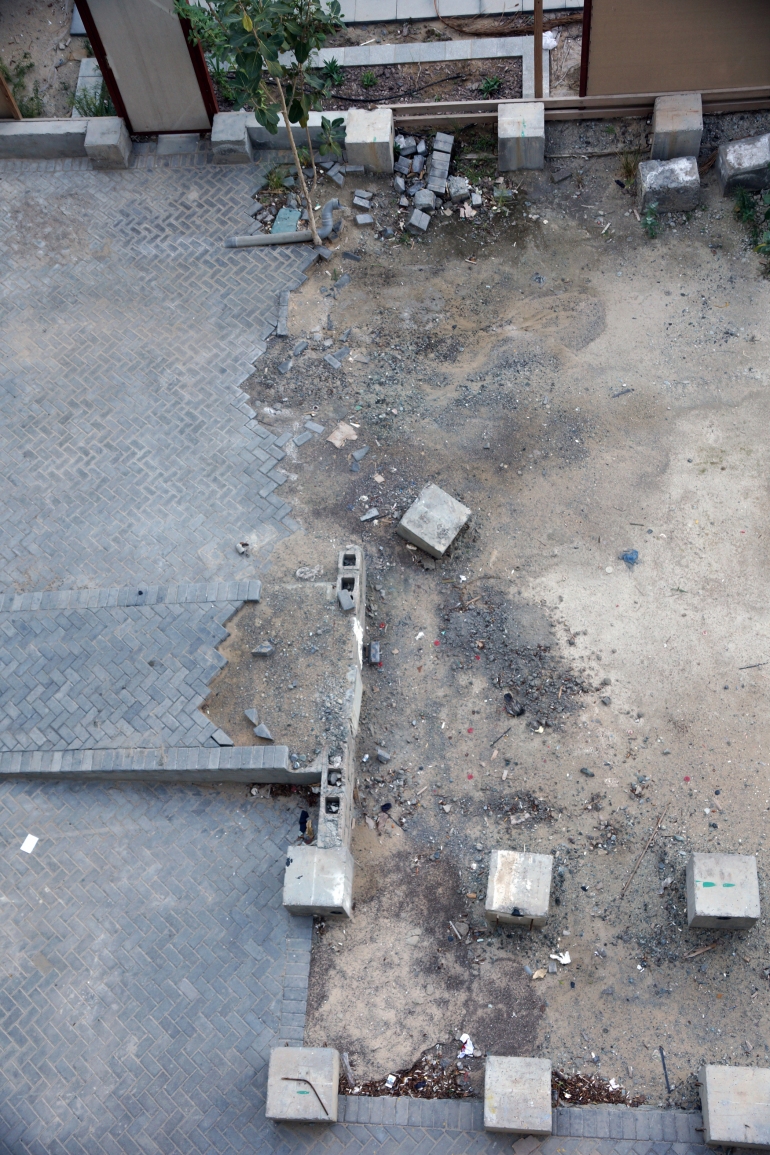 Though this is a sad sight, with an awakening economy and the fast approach of the Dubai World Expo in 2020, things have once again started moving. For every ten exotic renderings of Dubai on Archdaily, there is one constructed architectural artwork. One example is the Cayan Tower.

Though unfinished at the time of my visit, work continues on this nearly complete project. 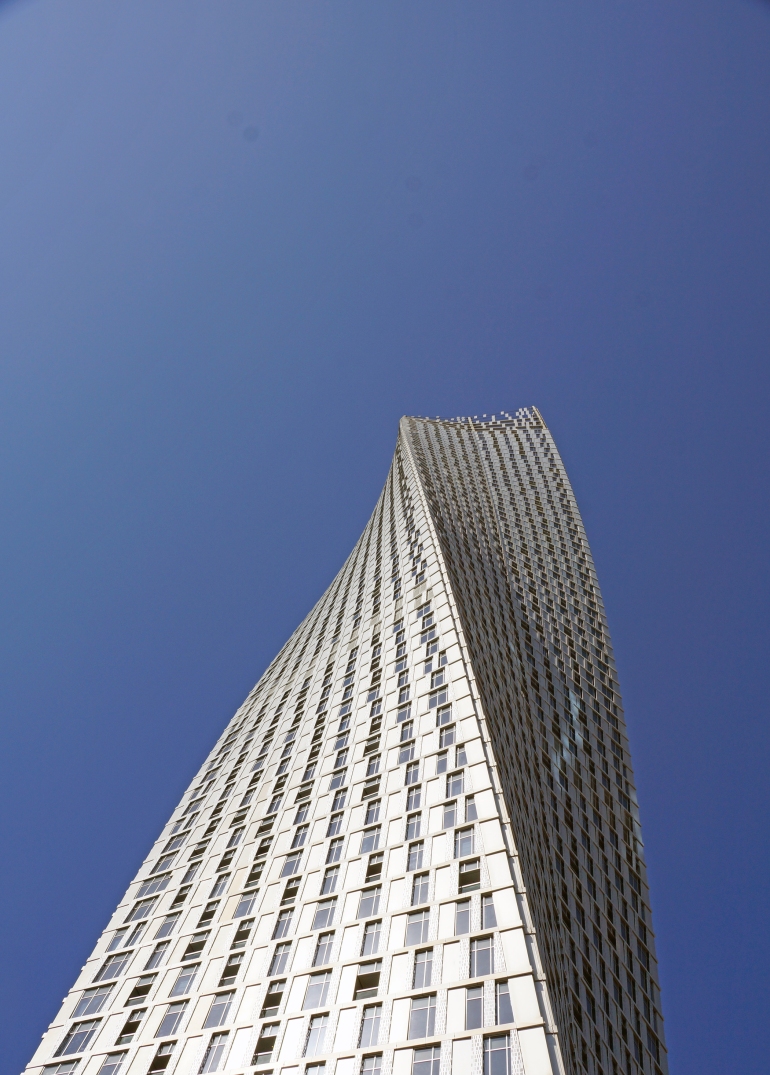 The tower twists as it reaches up towards the sky. It is a bit more awkward than a stacked series of planes that rotate as they move up, but it is still an eye-catching project.

Projects like this succeed for a reason. People seem to be thirsty for the new and original, and are willing to pay any cost. Sometimes the cost is much greater than a dollar amount. To create a unique piece of eye-candy, sometimes building performance is sacrificed. Meet the O-14 Tower:

From a distance, this building looks exactly as it’s computer renderings portrayed it.

Even when visiting the building up close, there is something enticing about this one-of-a-kind project.

It is essentially a glass tower, like any other in Dubai, that is wrapped in a thick skin, punctured by large apertures.

I could probably post a dozen pictures of this glaring, white surface that hovers a few feet from the black glass volume. I’ll limit myself to just three… 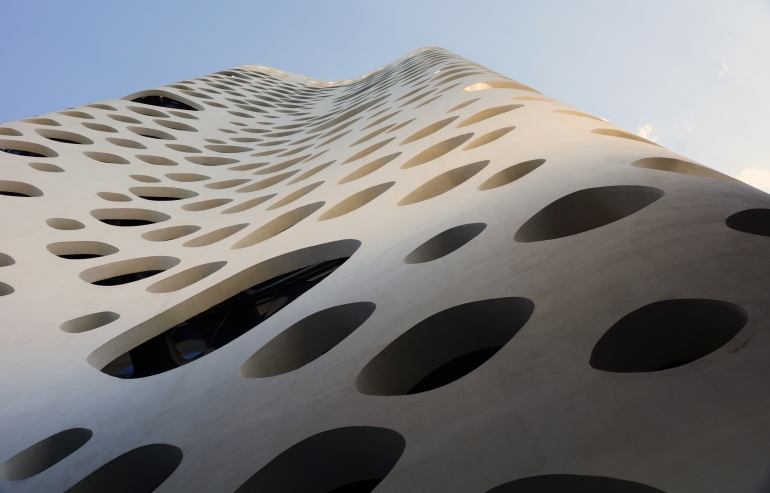 I can’t speak to much to how the skin affects the interior spaces, since I was only allowed into the lobby. I hope that the holes in the skin are related (either in size or proximity to one another) to the function of the spaces within the building, but it is doubtful that this is the case.

I do know that the punctures near the bottom of the skin expose the entry.

And that larger openings allow for halls of circulation to extend to and from the main volume.

But, as my father wisely pointed out, this floating skin poses a problem of function. Glass buildings in the desert, perhaps more than glass buildings in any other setting, must be washed almost continuously because of all the sand that collects on the surface. With a skin design like this, it is impossible for window washers to clean the black glass.

This was an uncommonly long post designed to come to the conclusion that though some buildings look cool, they don’t always work well. The above example is one found quickly just by looking at the building. Imagine, if you will, the problems that exist (if any) when trying to use the building.

Is it worth the cost? Is there any reason to create a landmark building and sacrifice function? I’m not sure there is a definitive answer. Architecture purists might follow the ideal that form follows function. A business savvy client might argue that unique sells, and that to fill the building with tenants they need something new and cool.

While trying to gain access to the interior of this building, I had a conversation with the security guard. I told him that I was an architecture student and that I just wanted to peak into the upper spaces, and he smiled and kindly said that would not be possible. So I thanked him and informed him that they had a very nice building.

To that, he grinned and exclaimed, “Yes! It looks like Cheese!”